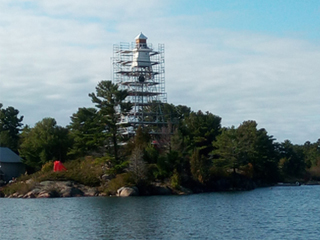 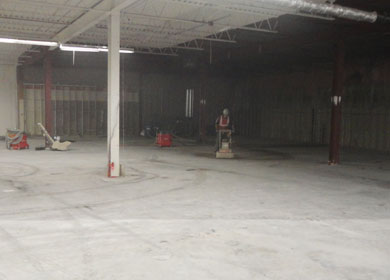 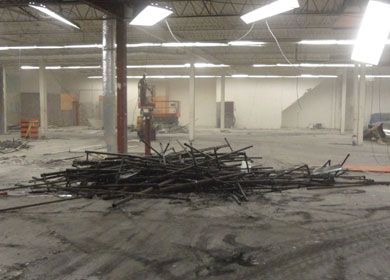 Tri-Phase was retained by a General Contractor company on behalf of a large chain of department stores to work on their conversion of one of their first stores in the GTA.  The store was located in a large shopping mall, had an area of 140,000 sq. ft. and a proposed schedule of 4 weeks.

The scope of work included hazardous materials abatement and disposal, interior demolition, both structural and non-structural including, but not limited to, floor tile removal and grinding of the entire floor slab, removal of escalators, shoring and cutting of suspended floor slab for new escalators and removal of load bearing walls.  Exterior demolition was also included in the scope of work.  Interior work was to be completed in four weeks with an additional two weeks to complete the exterior work.

As with all renovations, unexpected circumstances were uncovered that led to complications affecting the tight schedule.  Additional asbestos containing materials were discovered, unidentified pipes appeared once walls were removed and changes to the design of the new store were made, all requiring changes to the schedule on a regular basis.  The project required a 190 tonne crane to remove eight rooftop units due to the distance of the units from the perimeter walls and the tight working space around the base of the building.  All work was completed, including work in a bowling alley, while keeping the bowling alley underneath the store open for the entire duration of the project.

Tri-Phase Group (TPG) is a privately owned Canadian firm, offering a wide range of professional environmental, construction and restoration contracting services to private, public and crown corporations across the country. Since our inception in 1997, we have completed over 10,000 projects. Over the years, we have built a reputation for providing quality and professional services, with safe and cost-effective solutions that meet our clients’ needs....Read More


Our clients, employees and business partners are the foundation of our success. We strive for continuous improvements in business through building lasting relationships rooted in providing exceptional services based on safety, quality, and cost effective solutions. We conduct business in an ethical and an environmentally responsible manner, inherit in our core values and promoted through personal and professional growth.